The Princes in the Tower ghosts of Edward V and Richard, Duke of York 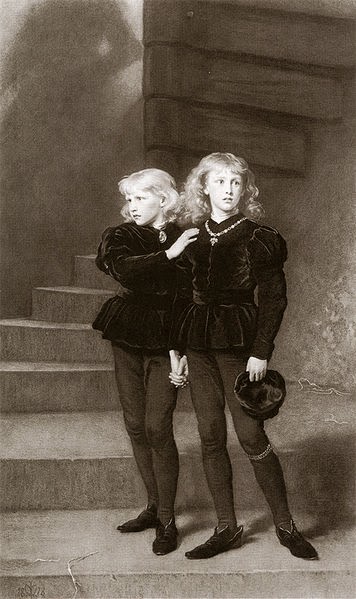 Nobody really knows the truth about the fate of  Edward V and his brother Richard, Duke of York, their ghosts are said to haunt the Tower of London the last place they were seen alive.

In 1483 following the death of his father, Edward IV,  Edward V set out from Ludlow to London for his coronation. Along the way his train was intercepted, at Stony Stratford, by his Uncle Richard, Duke of Gloucester and Henry Stafford, Duke of Buckingham. Several of Edward's entourage were captured and and sent to Pontefract Castle where they were later executed. Edward continued his journey to London in the custody of his Uncle. Upon his arrival in London Edward was lodged in the Tower which was in those days a Royal residence.

Word of what looked like a coup d'etat had reached Edward's mother Queen Elizabeth and she sought sanctuary for herself and her children in Westminster Abbey. Edward's younger brother Richard, the Duke of York was with her. She was however persuaded to release Richard into the care of The Duke of Gloucester to keep Edward company whilst awaiting the coronation.

On 22nd June Edward, his brother Richard and their siblings were declared bastards on the basis that their father had been betrothed to Lady Eleanor Butler before his marriage to their mother Elizabeth Woodville. A special dispensation by the Pope would have been required to make this marriage legal and it had not be sought. This gave Richard, Duke of Gloucester a claim to the throne and he was crowned, Richard III in Westminster Abbey on the 6th August 1483.

The Princes, Edward and Richard continued to reside in the Tower but were seen less and less.

"He and his brother were withdrawn into the inner apartments of the Tower proper, and day by day began to be seen more rarely behind the bars and windows, till at length they ceased to appear altogether." Dominic Mancini 1483

Rumours soon began to spread that the two Princes had been murdered in The Tower.

"In this year the two sons of King Edward were put to silence in the Tower of London." Robert Ricart, Recorder of Bristol 1483

The last person recorded to have seen the Princes alive was Edward V's physician Dr Argentine who reported that he was suffering from melancholy.

"the young King, like a victim prepared for sacrifice, sought remission of his sins by daily confession and penance, because he believed that death was facing him."  Dominic Mancini 1483

So what happened to the Princes in the Tower?

It has been widely believed that they were murdered by order of their Uncle Richard III but evidence is circumstantial and there were others who could have benefited from their deaths eg. The Duke of Buckingham who openly supported Richard III whilst plotting with the Tudors behind his back and Henry VII whose claim to the throne was actually very weak.

There is also the possibility that the Princes actually died of natural causes. Could they have been early victims of the sweating sickness that was believed to have killed Henry VII's son Prince Arthur?

In 1674 the bones of two children were found during work on The White Tower these were later interred in Westminster Abbey by order of Charles II.

In 1933 George V gave permission for the exhumation of the bones and an examination was conducted by William Wright and Lawrence Tanner which concluded that the remains were that of two children aged 12 to 13 and 9 to 11.

But there is too date no conclusive evidence that the skeletons are those of Edward V and Richard, Duke of York or indeed that the bones were even male or related. Tanner himself admitted that the examination had been based on a "over-riding presumption that the remains examined were of the missing sons of Edward IV"

The Bloody Tower is traditionally believed to be where the two Prince's were murdered, if indeed they were, it now houses a display about the Prince's disappearance. It is here that ghostly sightings of two small figures dressed in nightgowns  have been reportedly seen since the 15th century. Some say that the ghosts are sobbing and clinging to one another. But in 1990 two Coldstream Guards reported hearing the ghostly sounds of children giggling outside the tower, perhaps supernatural evidence of happier times for the two boys.