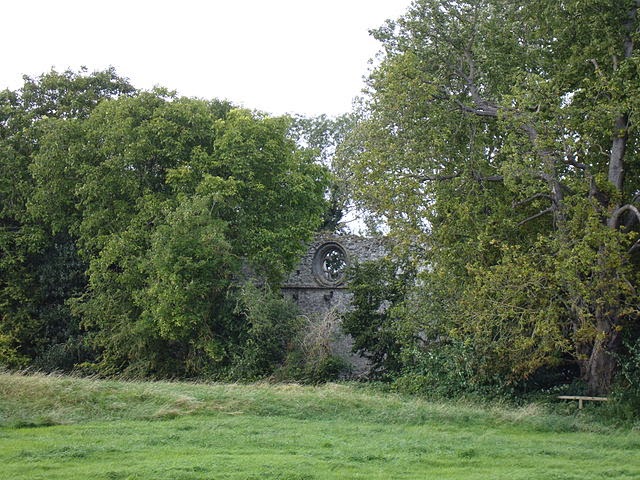 In 1249 Isabel, Countess of Arundel founded the Cistercian Marham Abbey, it was dedicated to St Mary, St Barbara and St Edmund and was home to between 10 and 15 nuns.

Unfortunately in later years the abbess, Sister Barbara behaviour  was far from saintly!

Sister Barbara was in league with a band of robbers who attacked travellers on nearby Vinegar Hill, the main route from Swaffham to Kings Lynn. The robbers not only stole from unwary travellers but aso made sure to leave them unconscious so that they could be "rescued" by the nuns at Marham Abbey. Of course the travellers, and their families, were grateful to be rescued and cared for and they showed their gratitude by giving gifts to the Abbey which became very prosperous.

As Marham Abbey continued to prosper the monks at nearby Pentney became suspicious of how this wealth was being achieved, they began to spy on Marham Abbey and on Sister Barbara in particular. It was only a matter of time before she was seen paying the band of robbers and Sister Barbara's fate was sealed. She suffered the punishment of being bricked up alive.

Sister Barbara is immortalized on the traditional Norfolk village sign, but that's not the only place she can be seen. It's said that on bright November nights the ghost of Sister Barbara walks Vinegar Hill.

As an aside it would seem that Sister Barbara's fate did not deter the bad behaviour of the nuns of Marham Abbey. In 1536  they were accused of disreputable behaviour and the nunnery was one of the first to be dissolved in Henry VIII's Dissolution of the Monastries.

You may also be interested in other November hauntings:

The Ghostly Bell of Thunderfield Castle


Image: By JohnArmagh (Own work) [CC-BY-SA-3.0 (http://creativecommons.org/licenses/by-sa/3.0)], via Wikimedia Commons
Posted by Haunted Isles at 13:37 No comments:

The ghostly bell of Thunderfield Castle

Located east of Horley off Haroldsea Drive is the 12th century  double moated site of Thunderfield Castle. A scheduled Ancient Monument Thunderfield Castle was said to have been a resting place for Harold's army as he marched towards battle at Hastings in 1066.

At sunset on 11th November a ghostly bell can be heard to toll, gradually getting louder and louder until midnight when a small ghostly army marches through the area.

Is this the Saxon army marching to their doom at Hastings?

Well the Battle of Hastings took place on 14th October so if this recurring haunting is taking place on the anniversary of an event it cannot be Harold and his men as they were long dead by 11th November.

Is it merely coincidence that the bell is heard to toll on Armistice day?

You may also be interested in other November hauntings:
Sister Barbara, the Ghost of Marham Abbey, Vinegar Hill, Marham, Norfolk.
Posted by Haunted Isles at 15:44 No comments:

Spirits of the Dead by Edgar Allan Poe

Posted by Haunted Isles at 14:15 No comments: