Winter's Tales ~ "speak of spirits and ghosts that glide by night" 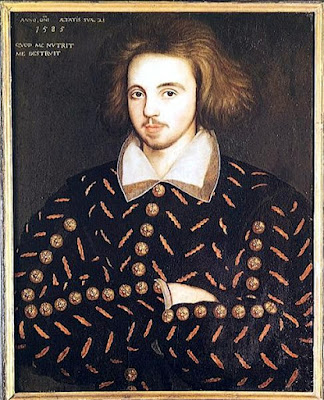 "Now I remember those old women's words,
Who in my wealth would tell me winter's tales,
And speak of spirits and ghosts that glide by night."

The Jew of Malta ~ Christopher Marlowe

Posted by Haunted Isles at 13:55 No comments:

The ghost of Anne Boleyn at Blickling Hall 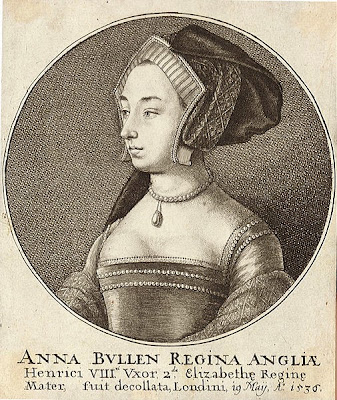 There is a strong tradition of the Boleyn's haunting Blickling Hall near Alysham in Norfolk, not just Anne but also her father, Thomas, and her brother, George. Blickling was home to Anne's parents, Thomas Boleyn and Lady Elizabeth Howard, until 1505 when Thomas's father died and they moved to Hever castle in Kent.

There are no official records of Anne Boleyn's birth date, or place of birth, but many historians, including Antonia Fraser, put Anne's date of birth at around 1501 although others have placed it as late as 1507. If she was born before 1505, which is highly likely, it would probably have been at Blickling.

Local legend says that on the anniversary of her execution Anne returns to Blickling in a carriage driven by a headless coachman drawn by headless horses. Anne herself is said to carry her head on her lap.

National Trust staff have over the years had several encounters with the ghost of a lady dressed in grey who some believe to be the spirit of Anne Boleyn returning to her first childhood home. In the Long Gallery library a member of staff watched a grey figure looking at books gradually fade away leaving a book open at a picture of Anne Boleyn.

Employee Sydney Hancock saw the grey lady walking by the lake, when asked if she needed help she responded, “That for which I seek has long since gone”. Hancock momentarily looked away and the lady disappeared.

The grey lady is even said to have signed for a delivery on the anniversary of Anne's death. Next day the delivery company phoned to say they hadn't got a signature, yet, the driver was adamant that it had been signed for.

In 1985 National Trust employee Steve Ingram was woken by footsteps coming into his bedroom at Blickling, when he switched on the light there was no one there. This happened on the anniversary of Anne's execution.

Anne isn't the only Boleyn ghost visiting Blickling on the 19th May. Also travelling by phantom coach drawn by headless horses is Anne's father, Thomas Boleyn, he carries his head under his arm, it has flames gushing from the mouth. Thomas Boleyn has been cursed, for a thousand years, to journey over twelve bridges between Blickling and Wroxham Broad on the anniversary of his daughter's death. He is pursued by screaming fiends from hell.

Anne's brother, George Boleyn, who went to the block just two days before Anne on 17th May is said to wander the grounds of Blickling. But on the night of the 19th May his headless body is dragged across the Norfolk countryside by four headless horses.

It isn't just the Boleyn family who haunt Blickling Hall, in a 2007 National Trust survey it was voted Britain's most haunted historic house.

Former owner and model for Shakespeare's character Falstaff, Sir John Fastolfe, has been seen from time to time throughout the house.

Ghostly groans that emanate from the west turret are believed to be those of Sir Henry Hobart who was mortally wounded in a duel fought on nearby Cawston Heath in 1698.

Gregorian chants have been heard in the Brown Room, site of a family chapel in Jacobean times.

A ghost dog roams the estate. The dog is believed to be the ghost of a 17th century gamekeeper's dog who was killed when found by the dead body of his master.

The fragrance of wild violets has been reported in the mausoleum, a perfume favoured by the 2nd Earl's wife.

There was also supposed to be a locked room somewhere in the house that had such an oppressive atmosphere that no one wanted to go near it. Known as “old Bullen's Study” it's location has been forgotten.

Nothing of the large brick house built by Sir Geoffrey Boleyn in the 1450's and inhabited by Anne now survives. The magnificent Jacobean Blickling Hall which stands on the site today dates from the 17th and 18th century, it is owned and managed by the National Trust. Please see website for opening times and special events.

The ghosts of Sutton Hoo

Sutton Hoo site of one of the most remarkable archaeological finds in the UK, the 7th century Anglo - Saxon ship burial of (possibly) Raedwald ruler of the East Angles might never have been excavated if it wasn't for ghosts.

Despite being the site of a number of burial mounds it had been assumed that, due to centuries of looting,  there was nothing left to excavate at Sutton Hoo until that is Dorothy Cox a friend of Tranmer House's owner Edith Pretty saw the ghosts of Anglo Saxon soldiers processing around one of the burial mounds. Everytime Dorothy Cox visited her friend she saw the ghostly soldiers and encouraged Edith to have the mound excavated.

In 1938 Edith Pretty arranged for farmer, archaeologist, Basil Brown to excavate the area at her own expense. In the Spring of 1939 Basil Brown discovered the perfectly preserved form of a ship some 27 metres long, the rest as they say is history.

But would the barrows ever have been excavated if Dorothy Cox hadn't seen those ghosts and do the ghosts of Sutton Hoo still walk?

Posted by Haunted Isles at 02:23 No comments:

Is this the ghost of Lady Jane Grey? 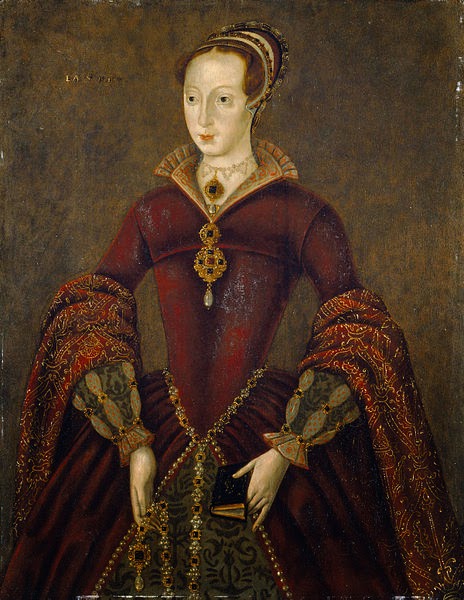 The tragic Nine Day Queen, Lady Jane Grey, was executed on 12th February 1554 her ghost is said to haunt the Tower of London, Astley Castle and Bradgate Park. Has the ghost of Lady Jane Grey been captured in this video taken at her former home Bradgate?

Visit Ayot St Lawrence in Hertfordshire and you may hear the roar of a motorcycle, Lawrence of Arabia's motorcycle. Thomas Edward Lawrence was a friend and frequent visitor to  Ayot St Lawrence resident, George Bernard Shaw and it would seem that the ghosts of both Lawrence and Shaw are still present in the village.

Lawrence of Arabia's motorcycle has been heard travelling the Hertfordshire lanes to Shaw's Corner, former home of George Bernard Shaw. Shaw's ashes are buried there. He died in 1950 and his housekeeper, Mrs Alice Laden, saw and heard him in the house several times after his death.

Ayot St Lawrence seems to be a bit of a magnet for famous ghosts with some folk saying that Anne Boleyn haunts the Manor House. There's an old legend that Henry VIII and Anne were riding past Ayot St Lawrence when a courtier, Nicholas Bristow, admired the place and asked whose it was. Henry replied, "It is mine, but now shall be your's" and apparently gave Nicholas his hat and the Queen's slippers as proof of intent.

Henry's hat and Anne's slippers have remained at the estate ever since. 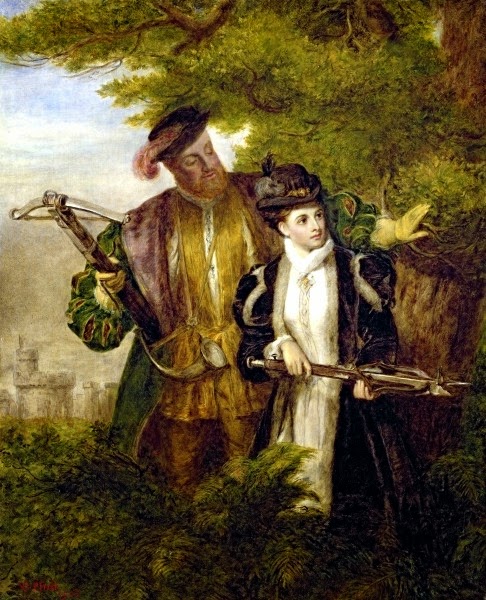 Sadly there is something a little awry with the story as Ayot St Lawrence didn't belong to the Crown until 1539, 3 years after the death of Anne Boleyn, It was granted to Nicholas Bristow, John Alway and John Brockett in 1543.

The Brockett name is immortalized in the village by another haunted location The Brocket Arms. Famously this 14th century inn is haunted by the ghost of a monk who was hanged there. There's a poem about him displayed behind the bar:

A monk had ridden as he fled from the mob
Of howling villains who fear no God.
They slung him up to a beam in the bar
Declaring he should not have ridden so far.

If you do go ghost hunting in Ayot St Lawrence be sure to avoid Hollowdane Spring in Brimstone Wood where a witch was burned to death. As well as having a very unpleasant atmosphere it's believed that bad luck will follow anyone who enters that particular clump of trees. 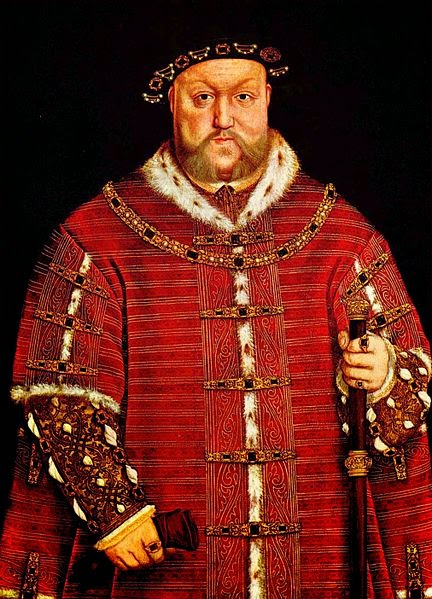 Henry VIII died at around 2am on 28th January 1547 he was buried in St George's Chapel, Windsor Castle on 15th February.

Henry VIII is one of the many ghosts who haunt Windsor Castle. Ghostly groans and the sound of someone dragging their leg whilst walking have been attributed to Henry who spent his later years in agony due to an ulcerated leg. 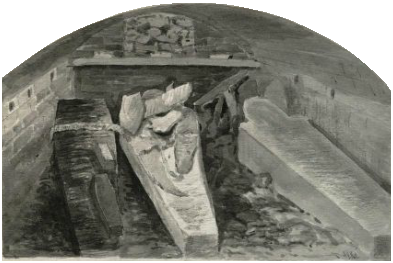 Henry VIII's coffin (centre) is pictured above in an 1888 sketch by Alfred Young Nutt, Surveyor to the Dean and Canons, Windsor Castle. Henry's coffin was damaged and Nutt recorded that some bodily remains were visible. 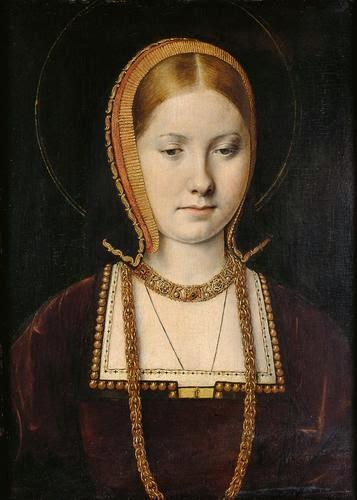 Following her November 1501 marriage to Arthur, Prince of Wales, Catherine of Aragon was sent to live in Ludlow, it is said she resided, with her Spanish entourage, in the medieval Castle Lodge until after Arthur's death in 1502 when she returned to London.

The ghost of a teenage girl, said to be Catherine of Aragon, has been seen in the attic rooms and nursery of the  Elizabethan Tudor mansion house that occupies the site of Catherine's Ludlow home. Visitors to Castle Lodge have also commented on cold spots and a disturbing feeling of being watched.

Historically we know very little about Catherine's time in Ludlow but it can be assumed that it was a difficult and unhappy time for the sixteen year old Princess of Wales.

For a start Catherine was not supposed to accompany her husband to Ludlow at all.

The plan, agreed with Catherine's parents, Ferdinand and Isabel of Spain, had been for her to remain at court in London where she would learn the English language and customs. But all this changed when her dowry was not paid in full. Catherine did not want to go to Ludlow, she refused Arthur when he requested that she go with him and only agreed to do so when ordered by her father-in-law Henry VII.

She was also unwell. During her journey from Spain to England Catherine had suffered from an illness described as "low fever" and things did not improve after her marriage. She is reported to have complained of hot and cold sweats, fevers, coughs, colds and a "derangement of the stomach." Today she would have probably been diagnosed as suffering from depression. Hardly surprising in a teenage bride who was unable to converse with her husband as neither could understand the other's pronunciation of Latin, the only language they had in common.

By March 1502 both Catherine and Arthur were seriously ill, possibly with the much feared and often fatal "sweating sickness." Catherine survived, Arthur did not, on 2nd April 1502 Catherine of Aragon was widowed and became the Dowager Princess of Wales.

The privately owned Castle Lodge in Ludlow stands on a corner plot near the castle, it is open to the public, at the time of writing visitors can take an un-guided tour for £3.00 per person.

Posted by Haunted Isles at 14:31 No comments: